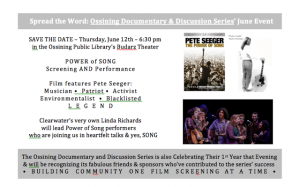 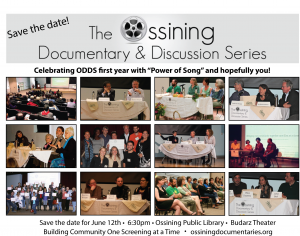 The Ossining Documentary and Discussion Series (ODDS) will be screening Pete Seeger: Power of Song with
a LIVE performance of Clearwater’s own Power of Song performers joining us in song and celebration.

Join us to celebrate the ODDS first Anniversary as well as Ossining’s continuing celebration of Pete Seeger.

Pete Seeger believed in the power of song, convinced that individuals can make a difference. Largely misunderstood by his
critics, including the U.S. government, for his views on peace, civil rights and ecology, Seeger went from the top of the hit parade to the top of the blacklist — banned from commercial television for more than 17 years. Seeger’s inspiring, but not always easy, story is told by Bob Dylan, Joan Baez, Bruce Springsteen,Arlo Guthrie, et al. and Seeger himself, through a remarkable historical archive.

For further info: http://ossiningdocumentaries.org/upcoming-films/june-power-of-song/  .”A good song reminds us what we’re fighting for.”

All ODDS events are FREE to the public.    Come join the ODDS community.