The Ossining Documentary & Discussion Series presents the screening of  HOPE ON THE HUDSON .


Join us when Director Jon Bowermaster returns to Ossining and to the Budarz theatre with his new series of short films focused on good news from our Hudson Valley.  Three films follow up  Jon Bowermaster’s previous series, ‘The Hudson, A River at Risk’ with a distinct pivot to optimism.  ‘City on the Water’ explores New York City’s  520-miles of coastline and the efforts across the city to make the waterways healthier more accessible. ‘Restoring the Clearwater’explores the nearly year-long restoration and the return of the ship to the Hudson River to continue to fulfill Pete Seeger’s mission to educate and roam America’s First River. ‘Seeds of Hope’ documents a unique effort during the 2017 harvest to save several varieties of Native American seeds that have    nearly gone extinct shows perspective into a multi-year effort to preserve both a rich agricultural heritage and Native American Culture
As always, this will be followed by our curated Q&A panel discussion.   Our panelists this month are:

Brooke Pickering-Cole, Director, Hudson Valley Farm Hub. Prior to becoming the Farm Hub’s Director, Brooke was the Associate Director for Community Relations for the Local Economies Project of the New World Foundation, serving on the team that developed the non-profit Farm Hub from its inception in 2013.  With a background in community development and local government, she is a former town supervisor and town board member in Marbletown, New York (Ulster County) where she has lived for the past twenty years.  During this period she worked on local initiatives in multiple reams including agricultural and open space protection, visual arts, historic preservation, and rail trail and municipal infrastructure improvements.  Brooke currently serves on the board of the Near Eastern Art Research Center, the O&W Rail Trail Commission, and the Live-Well Kingston Commission.  She is a graduate of Oberlin College

Eli Schloss , Tideline Program Director,  Clearwater. Eli develops and delivers all of the educational programming that is not related to the sloop, such as classroom visits and field programs on the shore of the Hudson. He grew up in Indianapolis, Indiana. After graduating from New York University with a BA in Art History, he began working in shipboard education. He crewed on Soundwaters, and the HMS Bounty, was the first mate on the Lettie G. Howard at South St. Seaport Museum, and spent time on various boats in Baltimore Harbor as part of Living Classrooms Foundation. With Living Classrooms, he was the director of the Customized Job Training department. He has worked at Clearwater since 2005. When not on the river, he enjoys cooking, soccer, and hiking with his family and dogs.

Erin Doran, Staff Attorney, Riverkeeper. After five years of representing non-profit organizations and community associations as an attorney with Environmental Law Clinic at the University of Maryland Francis King Carey School of Law, Erin joined Riverkeeper in 2016.   Erin’s work with the Environmental Law Clinic focused primarily on Clean Water Act enforcement and compliance in the Chesapeake Bay region. She supervised student attorneys in all phases of litigation, from case development to appellate arguments. Her experience also includes evaluating and commenting on environmental permits, analyzing the implementation of environmental laws, and developing educational trainings for local watershed advocates. 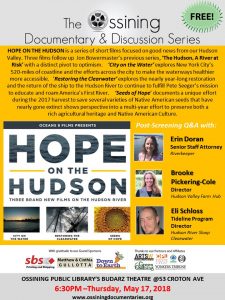 Our screening are always free and open to the public.
Posted in Green Ossining
← Big HEADS-UP for an abundance of planet-loving things to do in Ossining on Saturday May 5th!FUNFUNFUN! Storm Drain Stenciling Project on 6/30 from 10-Noon. Join us. Space is limited! →