The Ossining Documentary & Discussion Series is co-hosting a Special Engagement of three new short films exploring pipeline projects, proposed anchorages, and PCB contamination –three major threats to our Hudson River.   Special in timely content,  as well as the fact that it will be held on a Friday night at 7p,( instead of a Thursday @630p)…and we are honored to be joined by Zephyr Teachout as a panelist).     We’ll have our regularly scheduled screening for February on Thursday, February 23 @630p (more on that later).

Join our co-hosts and event sponsor – Riverkeeper –  for a screening and discussion of threats to our mighty river and how to stop them. 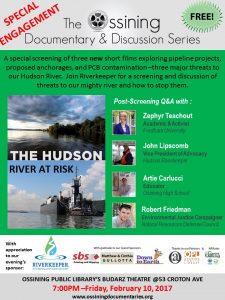 mentary & Discussion Series: www.ossiningdocumentaries.org or find us on Facebook.