As we honor Earth Day, join the Ossining Documentary & Discussion Series to discuss ACTIVISM in its many forms.

A FIERCE GREEN FIRE: The Battle for a Living Planet is the first big-picture exploration of the environmental movement – grassroots and global activism spanning fifty years from conservation to climate change.  Directed and written by Mark Kitchell and narrated by Robert Redford, Ashley Judd, Van Jones, Isabel Allende and Meryl Streep, the film premiered at Sundance Film Festival and has won acclaim at festivals around the world, chronicling the largest movement of the 20th century and one of the keys to the 21st.       It brings together all the major parts of environmentalism and connects them.      It focuses on activism, people fighting to save their homes, their lives, the future – and succeeding against all odds. 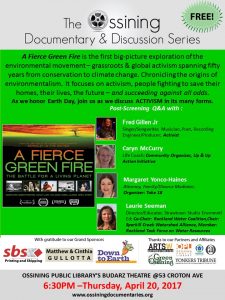